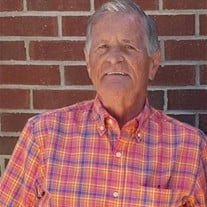 Wyman Jerry Parris, 79, died February 14, 2021, at Spartanburg Regional Medical Center. He was born February 3, 1942, in Chester, SC, the son of Clara Mae Lawson Parris. Wyman graduated from James F. Byrnes High School, Class of 1960. Following graduation, he served with the U.S. Army in Germany. He retired from Union Camp Corporation. Wyman was an active, longtime member of Lyman Wesleyan Church, where he loved to serve his Lord with his gift of singing. He was a loving husband and father, but most of all, “Papa” to many, especially his beloved grandchildren, and his three grand-dogs, Sophie, Sally and Layla. In addition to his mother, he was predeceased by his sister, Linda Butts and sisters-in-law Barbara Blanton, and Pat Parris. Surviving in addition to his wife Carolyn Padgett Parris, are his daughters, Cynthia Edge (Bobby) and Audra Fowler, both of Lyman; grandchildren Walt Fowler of Lyman, Elizabeth Edge of Athens, GA, and Allison Edge of Arlington, VA. Also surviving are brothers Hoyt Parris of Roanoke, VA, and Glenn Parris of Duncan; sisters Betty Darby (Johnny) of Spartanburg, Kay Whitlock (John) and Cyndi Suttles, both of Inman; brothers-in-law Bob Blanton and Terry Padgett (Sonya), both of Lyman; and many nieces and nephews. Due to COVID, a service of remembrance will be held at a later date. The family requests gifts in his memory be made to Lyman Wesleyan Church, P.O. Box 216, Lyman, SC 29365.

The family of Wyman Jerry Parris created this Life Tributes page to make it easy to share your memories.

Send flowers to the Parris family.