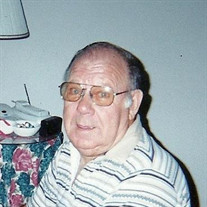 Wellford &#8211; William Harold McMakin, Sr., 81, of Wellford, passed away Friday, October 12, 2018. He was the son of the late William J. and Aurelia Powell McMakin. Mr. McMakin was a Truck Driver and an electrician. He was an avid bowler... View Obituary & Service Information

The family of William Harold McMakin Sr. created this Life Tributes page to make it easy to share your memories.

Send flowers to the McMakin family.