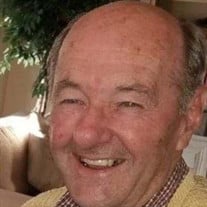 Willard, Tommy Ray age 75, died peacefully at home on September 9, 2020. Son of a sharecropper, he was born in NC to Harold F. and Lily “Chic” (Deaton) Willard. He is preceded in death by his brother Billy Willard of NC, and sisters Jean Henry and Peggy Ryan, also of NC. He leaves his wife, (Trish), Patricia (Cetone), and sons Aaron of Alaska and Thomas of Pennsylvania. He gained three additional children, Brian of California; Jeff of Colorado and Danielle of Florida with his marriage to Patricia, with two special recognition of Cheryl Bramini of Ohio and John Bews of Florida. He also leaves nine grandchildren. Tommy attended NC State and received his BS, MS, PhD in Animal Science with majors in BioChemistry and Animal Nutrition. Second Lieutenant Willard served in the US Army, and was stationed in Germany during the Vietnam Era. Through his profession, he devoted his life to the well being of companion animals, especially dogs and cats, and spent more than 48 years of his entire career to pet food development in the US, Europe and Asia. He became an independent nutritional consultant for ten years. Upon retiring, he mastered woodworking and produced one-of-kind tongue and groove handmade heirloom pieces. A warm, funny, kind, and friendly man, who never met a stranger and was curious about everything! He was a true Renaissance Man! He loved his family, good food, good bourbon, good conversation, anything sweet or fried, the Fall, traveling, jazz, country music, and appreciated nature’s beauty. Tom lived a full life and leaves a legacy of memories to all he touched. He was proud of his contribution to his profession, respected all veterans and proud of his country and his military service. He will be long remembered, and when you think of him – smile. A memorial service will be held on October 10, 2020 at The American Legion, Post 28, 94 W. Park Dr., Spartanburg, SC at 2PM. If you wish, please make a contribution to Spartanburg Regional Hospice C/O Spartanburg Regional Foundation, PO Box 2624 Spartanburg, SC 29304 or your favorite charity in his name.

Willard, Tommy Ray age 75, died peacefully at home on September 9, 2020. Son of a sharecropper, he was born in NC to Harold F. and Lily &#8220;Chic&#8221; (Deaton) Willard. He is preceded in death by his brother Billy Willard of NC, and sisters... View Obituary & Service Information

The family of Tommy Ray Willard created this Life Tributes page to make it easy to share your memories.

Send flowers to the Willard family.