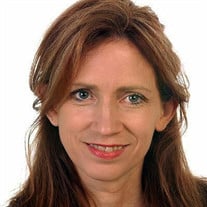 Suellen Eubanks (Dean) Wooton died November 18, 2017, at Greer Memorial Hospital after a four-and-a-half -year battle with triple-negative breast cancer. A celebration of her life will be held at 2 p.m. Saturday at Living Waters Funeral Home in Lyman, S.C. Visitation will precede the celebration at 1 p.m. Suellen was born June 15, 1961 in Mobile, Alabama, to Nita Mae McNeil and Forest A. Eubanks, both of whom preceded her in death, as well as a sister, Mary Ellen Eubanks. She is survived by her husband, Walt Wooton; her children, Chelsea Suzanne Dean Sosa, Lauren Ashleigh Dean, Rachel Kathryn Dean, and Grayson Wade Dean; her sisters, Annette Sanders and Wanda Slay; her nephews, Vance Smith, Steven Smith, Tommy Browning, John Sanders, and Michael Slay; her son-in-law, Alvaro Sosa; and her beloved grandson, Amaru Javier Sosa. Suellen was an award-winning journalist during her career with the Herald-Journal in Spartanburg, and she was repeatedly honored by the South Carolina Press Association for reporting and writing. Her work also earned the New York Times Company's most prestigious accolade, a Chairman's Award. A proud graduate of the University of Alabama, Suellen earned a bachelor of arts in journalism in 1983, then worked for weekly newspapers in Bay Minette and Monroeville, Alabama, before moving to South Carolina. She worked for the Union Daily Times prior to being hired by the Herald-Journal, from which she retired in January 2005. Contributions in memory of Suellen may be made to her grandson Amaru’s college fund at Future Scholar, South Carolina’s 529 Saving Plan. To make a contribution online, go to: https://futurescholar.ebilling.com. When prompted, enter Occasion code: SCQBcM4.

The family of Suellen Dean Wooton created this Life Tributes page to make it easy to share your memories.

Send flowers to the Wooton family.