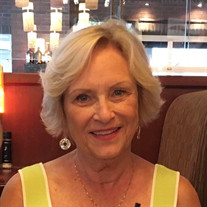 Shirley Queen Bostic was born in St. Petersburg, Florida on September 17, 1942 to parents Excel Charles Queen and Bernice Hoffman Queen. She died on September 2, 2021 in a tragic accident. She attended St. Pete High School where she was a majorette in the Green Devil Marching Band and played oboe in the Concert Band. She attended the University of Florida where she was a member of Zeta Tau Alpha Sorority, was a Gatorette in the Pride of the Sunshine Marching Band and was a runner up to Sigma Chi Derby Queen. In 1961, Shirley married and moved to Bradenton, Florida where she had her three beautiful girls. While in Bradenton, she was a member of the Bradenton Country Club, Beta Sigma Rho Sorority and Entre Nous Club. In 1977, Shirley remarried and moved to York, SC where she worked for various physicians and later became the Secretary for the York County Solicitor. In 1994, she and her husband moved to Greenville, South Carolina where she became the administrative office manager for the Clemson Small Business Development Center Extension office. She retired after 25 years of service with the state. Shirley was of the Methodist faith. She was a member of the Pebble Creek Country Club and was an avid tennis player who loved playing weekly with her dear girlfriends. Shirley had a beautiful smile and a love for people, especially her girls and her friends. She was an amazing cook and loved nothing more than having her family close to her. She will be greatly missed by her family and friends. Shirley was pre-deceased by her husband of 43 years, John A. Bostic, Jr. and her loving dog Carley. She is survived by her only sister, Barbara Queen Rothbeind and her three daughters: Laura Firkins VanZee (Brad), Cynthia Firkins Chitwood (Barry), Kristen Firkins Smith (Luke). She is also survived by her step-son, John A. Bostic, III and her two step-daughters: LuAnne Bostic Walden and Debbie Bostic along with 10 grandchildren, 10 great-grandchildren and many nieces and nephews. A memorial service will be held at a later date in both Greenville, SC and Rock Hill, SC. Dates and times will be posted on social media.

Shirley Queen Bostic was born in St. Petersburg, Florida on September 17, 1942 to parents Excel Charles Queen and Bernice Hoffman Queen. She died on September 2, 2021 in a tragic accident. She attended St. Pete High School where she was a majorette... View Obituary & Service Information

The family of Shirley Queen Bostic created this Life Tributes page to make it easy to share your memories.

Send flowers to the Bostic family.