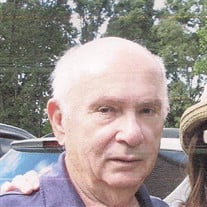 Spartanburg, SC: Ronald Burton Honney, 84, passed away Tuesday, April 23, 2019 at Spartanburg Medical Center after an extended illness. A native of Claremont, NH, Mr. Honney was the son of the late William Augusta and Madeline (Donavan) Honney and the husband of 58 years to Joan L (Bean) Honney. Mr. Honney did extensive international traveling with his job as an electrical engineer with Bryant Grinder. He served nine years with the National Guard and served 25 years as vice-president of the Claremont Speedway. Ronald enjoyed autos, snowmobiles and motorcycles. In 1992, he won Best of Show for his 1947 Blue Chief at the Indian Day Event at the Indian Motorcycle Museum. He was gifted in music, learning to play several different instruments. In addition to his wife, Mr. Honney is survived by: two children, Rhonda Raymond (Kim) and Sheila Daniels (Jerry), three grandchildren, Sheena Morin, Chase Morin, and Hunter Raymond, five great grandchildren, and a sister, Patricia McDonald. He was preceded in death by two brothers, William and Timothy and a sister, Eileen Lusco. A Reception for friends will be held Saturday, May 18, 2019 at the Common Man of Claremont, NH from 1:00pm-4:00pm.

The family of Ronald Burton Honney created this Life Tributes page to make it easy to share your memories.

Send flowers to the Honney family.