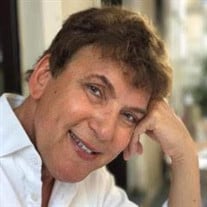 RALPH RIVERA, 71, passed away on Tuesday, October 29, 2019 at his home surrounded by family. Ralph was born September 13, 1948 in the Bronx of New York City. After graduating James Madison High School, 1966, he voluntarily joined the US Air Force during the Vietnam War, mainly stationed with 405th at Clark Air Base in the Philippines. In 1970 he was honorably discharged as Sgt. Ralph Rivera. From there he entered the University of Maryland in hopes to become a writer and English teacher, but before finishing joined David Berry’s band, ‘Anthem’ as a rhythm guitarist and later became the lead singer and songwriter. In 1981’Anthem’ disbanded in Spartanburg and Ralph began a new and successful career as an hairstylist in 1982. He attended Jiggles Hair Academy in London, England and Vidal Sassoon in Toronto and Vancouver, Canada. Meanwhile Ralph and a former ‘Anthem’ bass guitarist, Marty Harrison, formed a duo, 'Ralph and Marty' and performed together for 25 years, mainly at the Thunderbird/Phoenix Inn. From such a meager beginning and early hardships Ralph still was able to excel. His beautiful spirit could be felt by every individual that had the fortune to meet him. His smile and presence could light up a room. He had a tender heart full of empathy and compassion for all of God’s creatures and did much to raise funds for many causes in the community. His kindness, gentleness and love is legendary. Ralph was preceded in death by his father, Ray Rivera in 2018. He is survived by his wife, Dr. Brenda McGregor, mother Anna L. Garcia, son Travis Klimek, sister Diane Ramirez (Ernesto), brothers Joe Garcia, Larry Rivera and Randy Rivera, granddaughter Ella Myers. His Celebration of Life will be Tuesday, November 12, 2019. Family will be receiving friends at 2:00 p.m. and the Celebration will be at 3:00 at the Piedmont Club 361 E. Main Spartanburg, SC In lieu of flowers the family requests memorials to Spartanburg Humane Society 150 Dexter Rd Spartanburg 29303 or Animal Allies 1097 Asheville Hwy. Spartanburg, 29303 and please do an act of kindness this week in memory of the kindest man you could ever meet, Ralph Rivera. Online condolences may be left at www.livingwatersfh.com. Living Waters Funeral Home & Crematory Lyman, SC

RALPH RIVERA, 71, passed away on Tuesday, October 29, 2019 at his home surrounded by family. Ralph was born September 13, 1948 in the Bronx of New York City. After graduating James Madison High School, 1966, he voluntarily joined the US Air... View Obituary & Service Information

The family of Ralph Rivera created this Life Tributes page to make it easy to share your memories.

Send flowers to the Rivera family.