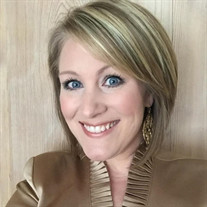 Kelly Marie Ryals, 42, passed away of natural causes on Saturday, February 20th. Kelly was born December 5th, 1978 in Greer, SC. Kelly was a 1997 graduate of James F. Byrnes High school, Cum Laude Graduate of Anderson University with a Bachelor of Arts degree with an emphasis on Interior Design, and a member of the Denmark Honor Society. Kelly was Miss Anderson College in 1999 and competed in the Miss SC pageant that same year. Kelly is the loving mother of two sons, Peyton Bryant Perry, 15, and Nolan Woods Perry, 14. Kelly remained close friends with her ex husband and her boy’s father, Trey Perry of Lyman. She is the daughter of Ronnie and Carolyn Ryals of Lyman. Kelly is survived by her brother Joey and his wife, Lizz; Andy and his wife, Ginger; Brian and his wife, Jamie; Bobby and his wife, Jackie and Kelly’s twin Danny and his wife, Laura. Kelly was also the loving aunt to Taylor (Auffarth), Drew, Lane, Robert, Luke, Evelyn, Hayden, Emily, Brayden, Lilly, and Riley Marie, great aunt to Jesi and special close friend to Sarah Mullins. Kelly is a member of West Spartanburg Baptist Church and very involved in her community. Kelly was the Vice President of Class 41 Leadership Greer (and and a member of BNI) Kelly was always the one ready for fun, whether that was a trip with her boys to her beloved Biltmore Estate, grabbing a microphone for Karaoke, re-designing a room or whipping up her famous banana pudding! Kelly was quick witted, with an even quicker smile. Kelly will be missed by all, including Chewy, whom Kelly rescued from the humane society and who became her best friend, confidant and protector. Kelly would hope that you would join her family in celebrating her life and rest in that she is perfect and wrapped in the arms of her Lord and Savior, Jesus Christ. In lieu of flowers, donations to help Kelly’s son’s may be made through this GoFundMe page: https://gofund.me/29d5b656 A memorial service will be held Saturday, February 27th at 11am at Lyman First Baptist Church.

The family of Kelly Marie Ryals created this Life Tributes page to make it easy to share your memories.

Kelly Marie Ryals, 42, passed away of natural causes on Saturday,...

Send flowers to the Ryals family.