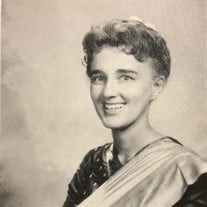 Juanita(Nita) Harrell Perret passed away on Sunday May 5, 2019 at Physical Rehabilitation and Wellness Center in Spartanburg following a lengthy illness. She was born in Norfork, Virginia on Jan. 2, 1930 to the late James F. Harrell, Sr. and Alice White Harrell. Nita, her mother and brother moved to Spartanburg shortly after the death of her father in World War 11. She graduated from Spartan High class of 1948. She went on to graduate from Spartanburg General Hospital's School of Nursing as an RN and then attended Bob Jones University in Greenville, SC. Nita went to India in 1956 to serve as a medical missionary at Ramabai Mukti Mission, an orphanage for girls, in the Poona District. She served as a nurse, taught nursing to the older girls, served as a mentor and house mother to a small group, and served alongside Dr. Sheila Gupta in a mobile medical unit as they went out into the surrounding villages. She served there for over twenty-three years, and ended with two years service in Chandarbazar at an orphanage for boys. Nita returned home and continued working as an RN at Doctor's Memorial Hospital and retired from Spartanburg Regional 's Outpatient Surgery Department in 1992. Nita married Roland Perret, a widower, of Peachland, British Columbia, Canada in Sept. 1994. They had served previously together on the mission field in India, and after their marriage they served faithfully as members of the Christian Missionary Alliance Church in Westbank, British Columbia. They were married for eighteen years until Roland's death in 2012. Survivors include her brother Jim(Betty) Harrell of Spartanburg, nephews Mike(Risa) Harrell of Tampa, Florida, Alan(Jennifer) Harrell of Cleveland, Ohio, a special cousin Elaine(Ron) Taylor of Roebuck, SC who she loved like a daughter; three step-children: Merrill(Carol) Perret of Port Sydney Ontario, Sherri(Tim) Foster of Lake Country BC, and Rob(Donna) Perret of Kelowna British Columbia; seven step-grandchildren, and thirteen stepgreatgrandchildren. Nita had been a member and faithful worker previously at Church of the Open Door, Christian and Missionary Alliance Church and was a current member of First Baptist Church of Spartanburg, SC. Nita was a wonderful Christian lady and an inspiration to all who knew her. She will be missed greatly by all her family and friends. A memorial service is planned for Saturday June 22, 2019 at 1 :30 P.M. in the Davis Chapel of First Baptist Church, Spartanburg, SC. conducted by Rev. Sal Barone and Rev. Skip Purdy. In lieu of flowers donations can be made to: Mukti Mission, P.O. Box 4912, Clinton, N.J. or to First Baptist Church, 250 E. Main St., Spartanburg, SC 29306.

Juanita(Nita) Harrell Perret passed away on Sunday May 5, 2019 at Physical Rehabilitation and Wellness Center in Spartanburg following a lengthy illness. She was born in Norfork, Virginia on Jan. 2, 1930 to the late James F. Harrell, Sr. and... View Obituary & Service Information

The family of Juanita "Nita" Harrell-Perret created this Life Tributes page to make it easy to share your memories.

Send flowers to the Harrell-Perret family.