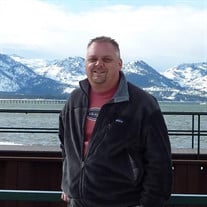 Simpsonville – Jon Gordon Jacobsen, 52, of Simpsonville, passed away Saturday, September 11, 2021. Jon was the son of the late Gordon and Martha Frank Jacobsen of Lyman, SC. Jon was born on October 21, 1968, in Virginia. He graduated from James F. Byrnes High School in 1986. Upon graduation, Jon proudly served in the US Navy. He completed bootcamp in San Diego, CA and served on US aircraft carriers during his enlistment. He also attended the University of South Carolina before settling down in the Simpsonville area. Jon was an Engineer at Windstream. After working several years in IT support, Jon launched into the world of business entrepreneurship and became the Owner/Operator of Biosan Professional Services. As an Environmental Sanitation expert, Jon sought to build relationships with customers and provide a safe environment for others. Jon had a great passion for the outdoors and found joy in sharing his adventures with friends. Whether it be the beach, golfing, camping, hiking in Colorado or skiing in Lake Tahoe, Jon was surrounded by close friends who had fun. Jon also had a soft spot for dogs and worked with local rescues to foster dogs in transition. On Friday nights, you could find Jon supporting the Byrnes Rebels by being an avid fan, a member of the Rebels Touchdown Club and by serving over concessions at the Byrnes football games. In his spare time, you could often find Jon helping out at Red Hill Farms where he loved making friends and serving his community. He was known for his quick wit, infectious smile, his brotherly love, and service for others. Jon is survived by his sister, Julie Jacobsen of Colorado; and several aunts and cousins, and many dear friends who considered him family. A Memorial Service is planned for Thursday, September 30, 2021 at 2pm at Living Waters Funeral Home and Crematory, 529 Spartanburg Hwy. S., Lyman, SC 29365. In lieu of flowers, donations can be made to Benjamin House by clicking this link (https://www.benjaminhouse.net/jon-jacobsen.html).

Simpsonville &#8211; Jon Gordon Jacobsen, 52, of Simpsonville, passed away Saturday, September 11, 2021. Jon was the son of the late Gordon and Martha Frank Jacobsen of Lyman, SC. Jon was born on October 21, 1968, in Virginia. He graduated... View Obituary & Service Information

The family of Jon Gordon Jacobsen created this Life Tributes page to make it easy to share your memories.