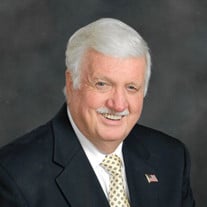 John Larry Atkins died peacefully in his home March 31, 2021. Born April 21, 1935, he was a son of the late Henry Purcell Atkins and Jesse Opal Wakefield Atkins. Larry was a graduate of Taylors High School and Robinson’s Business College. He retired as President of Turner Trucking, a division of Reeves Brothers, Inc. in Spartanburg where he worked for over thirty years. He was a former Commissioner of the Startex Fire District. He was predeceased by his wife of 39 years, Joyce Tinsley Atkins and a son John Larry Atkins, Jr. He is survived by a son Mike Atkins (Robyn) of Roebuck, two daughters, Pamela Atkins Harrison (Jim) of Marietta, GA, and Cindy Atkins Chibbaro(Mike) of Greenville, and a daughter-in-law Deborah Atkins of Greer. Also surviving are twelve grandchildren and seven great grandchildren, and his loving and faithful companion for the past fourteen years, Corrie Hall. Larry was a committed follower of Jesus Christ and was a member of Lyman Methodist Church. He also attended a weekly Bible Study with a special group of friends at Arcadia United Methodist Church. Larry was known by all as a kind gentleman with a quick wit and an easy-going personality. He loved Southern gospel music and traveled the area attending concerts of his favorite groups. He was an avid camper, and his “happy place” was sitting beside a warm campfire alongside a bustling mountain creek. A grave-side ceremony for family and close friends will be held at Fort Prince Memorial Gardens on Saturday, April 3 at 11:00 a.m. In lieu of flowers, donations may be made in Larry’s honor to Startex Fire District, 170 Spartanburg Road, Wellford, SC 29385 or Arcadia United Methodist Church Bible Study Group, P.O. Box 143, Arcadia, SC 29320.

The family of John Larry Atkins created this Life Tributes page to make it easy to share your memories.

Send flowers to the Atkins family.