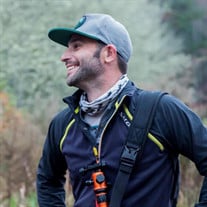 Dear Reader My brother, Jeffrey Curtis Hammond, died unexpectedly on March 12th, 2022. He would have been 42 years old come November 2nd.I've attempted to write a traditional obituary for weeks without success. The finality of an obituary unnerves me because Jeff remains undeniably present to his family. His voice threads itself between the words his 8-year-old daughter, Wren, speaks. The enormity of his spirit is nearly visible when she laughs like a flame sparking when it meets breath. His father, Curt, meets his presence at the coffee maker each morning, the place they'd often gather on the weekends. Although the chatter that used to accompany it is absent, his mother, Sharon, still hears his footsteps match her own down her neighborhood's sidewalks as she takes the route they often did together. The places his brother, Tom, only two years his junior, feels his presence are innumerable. A brothers' intuitive bond is forged through shared childhoods, circumstances, numerous fights, and embraces. That connection is as challenging to describe in death as it was in life. Jeff is indelible. He is like the mountains he used to frequently hike and photograph in that he will continue to exist beyond us. Nature was his cathedral. Many have reached out since his death with their condolences and stories. Descriptions they used include, "Kind soul, hilarious, huge heart, a lover of music and all God's creations, humble, and adventurous," but the one that resonates with me the most due to its accuracy and the bitter sting of reality is "full of life." Jeff loved an audience, whether he was in the midst of one at a Widespread Panic concert or the creator of one with his dancing and laughter in a welcoming living room. Full of life, indeed. We do not move on with our lives without him. We move forward with Jeff palpably alongside us. -Jenny Nichols, Sissy

Dear Reader My brother, Jeffrey Curtis Hammond, died unexpectedly on March 12th, 2022. He would have been 42 years old come November 2nd.I've attempted to write a traditional obituary for weeks without success. The finality of an obituary... View Obituary & Service Information

The family of Jeffrey Curtis Hammond created this Life Tributes page to make it easy to share your memories.

Send flowers to the Hammond family.