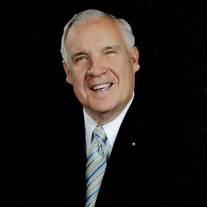 James Larry Williams, age 79, received full healing and completed his 60-year journey from death to life, promised by his Lord and Savior, on Thursday, October 6, 2016. We have that confidence because at age 19, he trusted Christ through His sacrificial death to pay his penalty for sin. His wife and pastor were at his bedside when he peacefully passed into the presence of his Savior. James (Jim) was born March 28, 1937 to Wallace and Mazie Orr Williams in Atlanta, GA. He completed his college degree in 1970 from Tennessee Temple University while working full time to provide for his family. From 1971 to 2004, he worked in the Christian publishing industry, first with Christian music, and then with Bibles and Christian books. After retiring, he served in Gideons International. Jim was a member of Brushy Creek Baptist Church. Jim is survived by his loving wife of 56 years, Carolyn Walters Williams, and four children, Deb (Bob) Thompson, Chuck (Pam) Williams, John Williams, Denise (Cliff) Styles. His heritage also includes nine grandchildren, Jennifer (Grayson) Cartwright, Julie (James) Kieser, Joy Thompson, Jessica (Michael) Dunlop, Kaitlyn (Ryan) VanderMolen, Jonathan (Marlaina) Williams, Matt (Brittney) Williams, Emma Styles, Sam Styles, two great-grandchildren, Amelia Dunlop and Garrison James Williams, as well as a third great-grandchild on the way. He is also survived by several brothers-in-law, sisters-in-law, nieces and nephews. He was preceded in death by his father, Wallace Williams, his mother, Mazie Orr Williams, his siblings, Anne Atkins, Robert Williams, Mildred McConkey, Peggy Nolan, and Evelyn Paige, and his daughter-in-law, Ruth Williams. As a young boy growing up with meager provisions, Jim worked hard to help provide for his mother. He has remained a faithful and devoted provider all of his life for his family. He was known as a man with a gentle spirit and a tender heart for anyone, whether they be family, relatives, the disabled or complete strangers. Even animals could sense his gentle, loving and caring spirit. Visitation will be held prior to the service on Wednesday, October 12, 2016, from 1:00pm to 2:30pm at Brushy Creek Baptist Church. A service celebrating Jim’s life will be held on Wednesday, October 12 at 2:30pm at Brushy Creek Baptist Church, 4999 Old Spartanburg Rd, Taylors, SC 29687. God used the witness of His Word transforming the lives of former classmates to bring Jim to Himself and the Bible became a treasured theme of Jim’s life: first in obtaining a degree in Bible, then teaching Sunday School, selling Christian music, and lastly selling Christian books and Bibles before retiring. After retiring, Jim wanted to give away God’s Word, so he lovingly served in Gideons International for over a decade, getting Bibles into hotels, hospital rooms, waiting rooms, schools, and prisons. Even during his cancer battle, he continued teaching Sunday School and working with the Gideons. O death, where is your victory? O grave, where is your sting? Now the sting of death is sin, and the power of sin is the law. But thanks be to God, who gives us the victory through our Lord Jesus Christ!” In lieu of flowers, please make memorial donations to: Gideons International, PO Box 1941, Taylors, SC 29687.

James Larry Williams, age 79, received full healing and completed his 60-year journey from death to life, promised by his Lord and Savior, on Thursday, October 6, 2016. We have that confidence because at age 19, he trusted Christ through His... View Obituary & Service Information

The family of James Larry Williams created this Life Tributes page to make it easy to share your memories.

Send flowers to the Williams family.