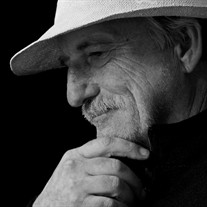 James Charles "Chuck" Doster, of Spartanburg South Carolina, crossed over to join our Lord Jesus Christ on Friday, August 6th, 2021 after conceding the battle with throat cancer. Chuck was born on July 27th, 1955 in Columbia, South Carolina. After graduating from Kirby High School in 1974, in the height of the hippy era, decided to join the Navy and became a Medic/Corpman with an LVN in California. After serving four years, he was discharged with honors. Every profession he chose after that, he performed with excellence. The job never defined him, he defined it. At Converse College, his name is on a plaque for being awarded the "Spirit of Converse Award" in 1995, a highly prestigious award. He created the Piedmont Gospel Project in 2001 at the old Spartan Mill before it was taken down. He wrote all the lyrics performed by many of Spartanburg's beloved musicians. There is a PBS documentary about the project. He produced and managed The Calhouns among other musical projects. These are just a few of his accomplishments. He lived life. From childhood throughout his life, he has been creative particularly drawn to music and writing lyrics but on his fiftieth birthday was called to write poetry until his death. You can find his latest writings on his Doc Huckster Facebook page. They are for all. He loved intensely each and every person in his life, and respected their autonomy and individuality. He made each person better for knowing him. He is preceded in death by his mother Mildred Gibbs, Step-father Kenneth "Dusty" Doster and father William "Bill" Boce Cubitt. He is survived by his wife Theresa Jane Doster and two sons; James Dylan Doster and his wife Natasha and their daughter Hailee, Derek Lee Doster and his wife Rebekah, and their mother Beverly Doster; and daughter Megan Sklar and her two daughters Ava and Hazel. He will be cremated at the Living Waters Funeral Home & Crematory, Lyman SC. Chuck has requested, in lieu of flowers, read a book.

The family of James C Doster created this Life Tributes page to make it easy to share your memories.

Send flowers to the Doster family.