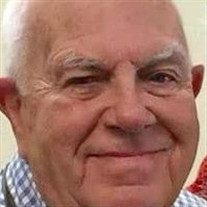 Lyman, SC Earle Provost Dunham, Jr. passed away Saturday, October 28, 2017. He leaves his wife of 56 years, Alice Dunham; his daughter, Diane Drexler (Wes); sons Robert Dunham (Nancy) and Jeffrey Dunham (Carrie); his grandchildren Paul Drexler, Sarah Drexler, Hannah Dunham, Joshua Dunham, Emma Dunham, Sophia Dunham, and Davis Dunham; his sister Susan Beckman (Cliff), and many close friends. Born in Philadelphia on February 25, 1936, to Earle Provost Dunham and Rose Paul, he lived in Spartanburg for the last 34 years. He received a Bachelors of Science degree in Business Administration from Hampden-Sydney College in 1958. Earle was an active member of Joy Lutheran Church where he was involved in the choir, the finance committee, and Beacon Men-a-Plenty. He worked as a Controller and Project Manager for Handling Services, Incorporated, in Greenville, SC. For many years, Earle was an active leader with the Boy Scouts of America. He enjoyed traveling with his wife and friends, reading, the outdoors, and spending time at the beach. Overall, he was most passionate about his family, especially his children and grandchildren. A memorial service will be held Saturday, November 4, 2017 at Joy Lutheran Church, in Moore, at 10:30am. The family will receive friends beginning at 9:30am. In lieu of flowers, donations may be made to Spartanburg Regional Foundation’s Respiratory Outreach Fund, 101 East Wood Street, Spartanburg, SC 29303.

The family of Earle Provost Dunham Jr. created this Life Tributes page to make it easy to share your memories.

Send flowers to the Dunham family.