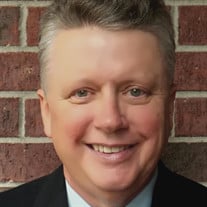 Donald R. Patterson, Jr. died unexpectedly of natural causes on Oct. 22, 2021, with his wife, Cheryl, at his side. He was 65 and on the cusp of enjoying retired life in South Carolina after a long business and sales career in the Houston area. For nearly 40 years, the couple were residents of Pearland, Texas, where Cheryl was an educator in the local school district. Don was born on Nov. 11, 1955, at Episcopal Hospital in Philadelphia, the first-born child of the first baby (his mother) to be delivered at the hospital’s maternity ward 22 years earlier. As the eldest sibling, Don looked after other family members with great kindness and concern throughout his life. He was known as “Ricky” or “Rick” in his youth and “Don” or “Donny” thereafter. A voracious reader since boyhood, his love of learning was a quest not just for facts but for insight and meaning. He was at ease talking with everyone he met and was a generous listener, paying careful attention to the triumphs and troubles of others. He was a devoted family man, steadfast friend, and loyal fan of Philadelphia and Houston sports teams. Don had an encyclopedic mind, and his interests were broad and deep. He took special pleasure in rock music, philosophy, history and political science, and he delighted in the writings of H.L. Mencken and Hunter S. Thompson. A southpaw, Don had a knack for looking at issues from different perspectives. He would occasionally end an email, after an impassioned rant, with the signature “Philosopher King.” Far more often, though, his email signature included a Mark Twain quotation: “Do the right thing. It will gratify some people and astonish the rest.” Integrity — and the struggle to do right in a world where doing wrong is far easier — were core to his being. Quick-witted and with a wicked sense of humor, Don loved both playful banter and a solid practical joke. He savored good food and good spirits. He also was a sentimental man, taking a heartfelt pause as he studied an old photo or relished a family story. As a remembrance, he regularly wore watches of men in his life who had passed away. Every day, he embraced life’s simple joys. In his youth, Don was an Episcopal acolyte. He was active in Scouting into his teenage years, including on a project to teach children with handicaps how to swim. He was a volunteer coach for his daughter’s basketball and volleyball teams, through AAU basketball and the Pearland YMCA, throughout her middle and high school years. He also volunteered at the Pearland Senior Center. Don was a 1973 graduate of Council Rock High School in Newtown, Pennsylvania. He attended Northeastern University in Boston for several semesters, and earned a bachelor of science degree in government at the University of Houston-Clear Lake in 1994. He was always conscientious, with an impeccable work ethic. Don’s varied career spanned the nonprofit, small business, large corporation, retail and government sectors. With employers including Macy’s and T-Mobile, he focused on sales and account management. As a mortgage counselor, he helped people make their home-owning dreams a reality. With the federal government, he specialized in disaster relief, guiding people as they pieced their lives back together. He enjoyed team leadership, motivation, mediation and conflict resolution — mostly, just helping people. He was a treasured colleague and mentor. Besides Cheryl Patterson, his partner in love and life for over 41 years, Don is survived by his beloved son and daughter, Ryan and Brittany Patterson; his mother, Joan Patterson; a brother, Steven Patterson (and spouse May), sisters Karen Patterson, Donna Grainger (Ron) and Debbie Carmody (Dennis); his stepmother, Maureen Patterson; mother-in-law, Nancy Slagle; sister-in-law Luann Slagle; brother-in-law Gary Slagle (Laurel); and numerous nieces, nephews, and cousins. He was predeceased by his father, Donald R. Patterson, Sr.; a brother, Robert Patterson; grandparents Olive and William Lewis, Sr., and Helen Beauchamp; godparents Eleanor and William Lewis, Jr., his aunt and uncle; and other cherished family and friends. We cannot describe how deeply Don will be missed every day.

Donald R. Patterson, Jr. died unexpectedly of natural causes on Oct. 22, 2021, with his wife, Cheryl, at his side. He was 65 and on the cusp of enjoying retired life in South Carolina after a long business and sales career in the Houston area. For... View Obituary & Service Information

The family of Donald Richard Patterson created this Life Tributes page to make it easy to share your memories.

Send flowers to the Patterson family.