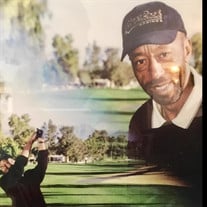 David Benson was born on January 29, 1949 in Moore, South Carolina to TL Benson (deceased), and Nellie Bobo Benson. David attended the Lower Shady Grove Baptist Church as a child and was a graduate of Florence Chapel High School. David’s early adulthood blessed him with his first born son Robert McMillian and also prior to enlisting in the US Army he was also blessed with his second son Runion Foster and two years later his third son Kelvin Foster. David Benson served in the US Army 101 st Airborne Division from September 1969 to September 1971. He was honorably discharged after the Vietnam War and suffering hearing loss and PTSD from a horrific life altering battle. After serving in the Army his travel landed him in California and he decided to make it his new home. It was here that he continued his heavy equipment operator training through the Operating Engineer training trade school program. Upon completion he proudly became an Operating Engineer and advanced to a Journeyman with Local 3. His career lasted over a span of 35+ year time frame until retiring in 2009. Several California developments sit on foundations made by David’s years of loyal hard work. One of his many projects included being able to provide assistance in the filming of George Lucas’s film, Indiana Jones, by moving cranes during special affects for the film in San Rafael, CA. When David was not working he enjoyed bowling early on for a while and was quite good at it. But he developed a life-long love for golf that lasted that remained. He traveled the United States participating in various golf tournaments. He was a winner! As a champion golfer he won various trophies, gifts, money, and one of his most proud moments was a hole in one which won him a new Lexus. David was also very loyal to his faith and regularly attended church and bible class. He was also quite a baritone singer and sang in the choir for a few years. Another blessing that occurred in addition to being blessed with three sons Robert, Runion, and Kelvin later in California was a baby girl Megan who he proudly raised. David settled in San Leandro CA and made this his permanent home. After retiring David still maintained a powerful work ethic and opened a golf shop in San Leandro, CA called “D&B Enterprises.” He enjoyed giving golf lessons on the side. After continuing to work for a few more years beyond retirement, he decided to stop working. He spent more time with his daughter, sons, and grandkids. He also spent more time golfing and hanging out with his buddies fishing. He was able to watch many milestones that occurred with his loved ones. He developed long lasting relationships, with an abundance of loving friends who became his extended California family. David Benson was a loving, caring, giving, talented, strong individual. He stood out with his handsome features, dignified, ever so sharp, clean cut all the time. He possessed a statuesque presence! He was loved and touched by many and anyone that knew him would say the same. On December 24 th at 3:42am David was called home after a two year battle with cancer and dementia. He maintained his solider strength, humor, loving and giving kindness until the end. He was a fighter! He leaves to cherish his mother Nellie Benson. Four children and their spouses Megan (Anthony) Porter of Hayward CA, Robert (Patrick) Sutton-McMillian of Atlanta GA, Runion (Bridgott) Foster of Lyman SC, Kelvin Foster of Lyman SC. His beloved grandchildren (one proceeded him in death Tyler Benson): Taylor, Nathaniel, Jordyn (Lincoln) Jabari (Porter) Ashley, Corey (Foster) Brittney (Foster-Meadows) husband (Adrian). David is also survived by ten siblings: Dorothy (John) Garrett, Marietta GA, Martha (Claude) Booker, Spartanburg, SC, Mary Benson Howard, LT Benson, and Frances Black of Kansas City, MO, Thomas (Jeanette) Benson of Lyman, SC, Lawrence Benson, Lois (Charles)Allen , Bernerdine (Collie) Feemster, and Deborah Benson Evans of Spartanburg, South Carolina. Rosie Bobo Gentry, a host of nieces, nephews, cousins, cherished high school and golfing buddies and a host of friends. With the humble beginnings of a sharecropping father, David achieved the respect and admiration of the great and the small. He leaves behind a great family legacy.

The family of David Benson created this Life Tributes page to make it easy to share your memories.

Send flowers to the Benson family.