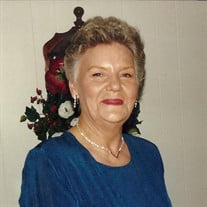 Boiling Springs, SC &#8211; Betty Jo Smith Graham, 90, of Boiling Springs, SC, passed away Friday, October 9, 2020 at her home, surrounded by her Children and Grand Children. Born August 24, 1930 in Spartanburg, SC, she was the daughter of... View Obituary & Service Information

The family of Betty Jo Smith Graham created this Life Tributes page to make it easy to share your memories.

Send flowers to the Graham family.